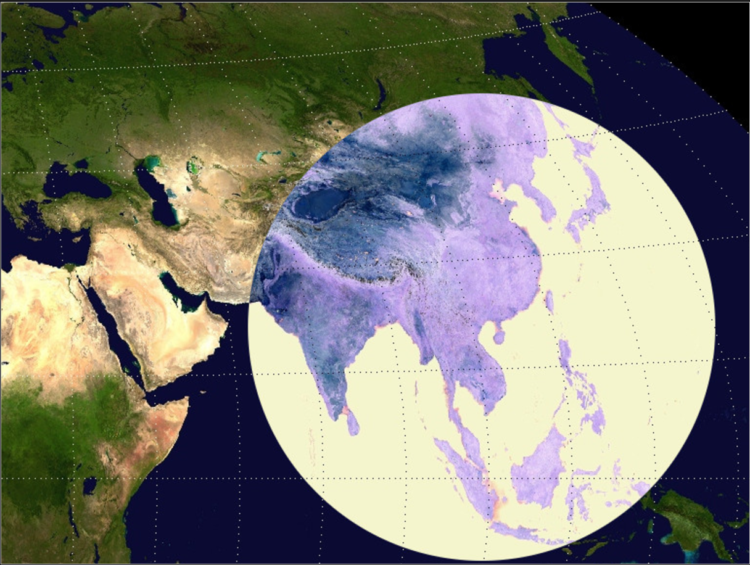 Half of everything that occurs to people occurs inside this simple circle, because half of humanity lives within this simple 4,000-kilometre circle.

I’m in an eastern Asian mood today. Many things have reminded me of it. For instance, Thailand is renown for its Public Services advertisements on television. Here is a recent example, a full movie told in only three minutes: Click here to read Adweek’s story about why and how it was produced.  The same producers two years earlier created a possibly even better Public Services short, about compassion: The story behind that one is here. ∅   Kudos to Chinese pharmaceuticals billionaire Li Jinyuan who took 6,400 of his employees on a nine-day vacation in France.  They arrived aboard 84 commercial flights and occupied 140 hotels.  the cost was €15 million ($18 million). ∅   Who exactly won? Forty years after Communist North Vietnam took over capitalist South Vietnam, an international poll reports that Vietnam is now the world’s most capitalist country. China was ranked fourth. ∅ When traveling to such places, or anywhere in the world, I’d always thought that the best passport to have was Swiss, because nobody blocks the politically neutral Swiss. However, CNN reports that the best passport to have is actually U.S. or U.K., followed by France, South Korea, or Germany, or Sweden, or Italy, or Denmark, Singapore, Finland, Japan, Luxembourg, or Netherlands, and only then Swiss. Those groupings are based upon how many countries the passport holder is allowed to enter either without a visa or by relatively easily obtaining a visa upon arrival at the border. One hundred forty-seven countries permit that for U.S. or U.K. passport holders. ∅ Speaking of travel, it was interesting to see the the CEO of the Starwood Hotel Group concede that his company’s Sheraton brand has become tired and in need of change. ∅ You might say that I’m sensitive to submarines. Although my naval officer father served aboard surface ships during World War II and the Korean Conflict, I grew up around New London, Connecticut, headquarters of the U.S. Navy’s submarine fleet. Seeing nuclear submarines silently leave that port (which was actually across the river in the town of Groton) was a routine sight. By far the most advanced submarines in the world are the Seawolf-class submarines constructed just after the end of the Cold War. These ships indeed are parts of a trio of U.S. ‘superweapons’ that no other nation possess. The other two in the trio are the super-accurate LGM-30G Minuteman III missiles (each capable of delivering within 30-minutes a thermonuclear warhead, […]

Here’s an technology story that portends civil unrest in China during the this and the next decade: SHENZHEN, July 29 (Xinhua) — Taiwanese technology giant Foxconn will replace some of its workers with 1 million robots in three years to cut rising labor expenses and improve efficiency, said Terry Gou, founder and chairman of the company, late Friday. The robots will be used to do simple and routine work such as spraying, welding and assembling which are now mainly conducted by workers, said Gou at a workers’ dance party Friday night. The company currently has 10,000 robots and the number will be increased to 300,000 next year and 1 million in three years, according to Gou. Foxconn, the world’s largest maker of computer components which assembles products for Apple, Sony and Nokia, is in the spotlight after a string of suicides of workers at its massive Chinese plants, which some blamed on tough working conditions. The company currently employs 1.2 million people, with about 1 million of them based on the Chinese mainland. For more than 60 years, the Chinese Communist Party has been carefully (some say dictatorially) trying to grow the Chinese economy without creating civil unrest resulting from first industrialization and lately a conversion to a capitalistic economy. How to keep the country fed when farmers are tempted to quit the plows for higher paying factory work? How to keep the factory workers happy without slowing down production or causing economic inflation? Etc. The bloody Tiananmen Square protests of 1989 showed just how close to boiling over social unrest is in the People’s Republic of China. If Foxconn, whose workforce is already anxious (some suicidally so), plans to replace a large number of workers with millions of robots, how soon before other Chinese factories similarly replace their own workers. What will such conversions means to the hundreds of millions of factory workers in China. Unemployment. Perhaps there employee retraining programs will be offered, but for hundreds of millions of workers? And to do what? During the early 1800s in Britain, textile workers who were replaced by machines protested and rioted. They were called Luddites, after a figure from English myth. I wonder what will we call the Chinese software factory workers who will be replaced by robots and who will surely protest and riot?