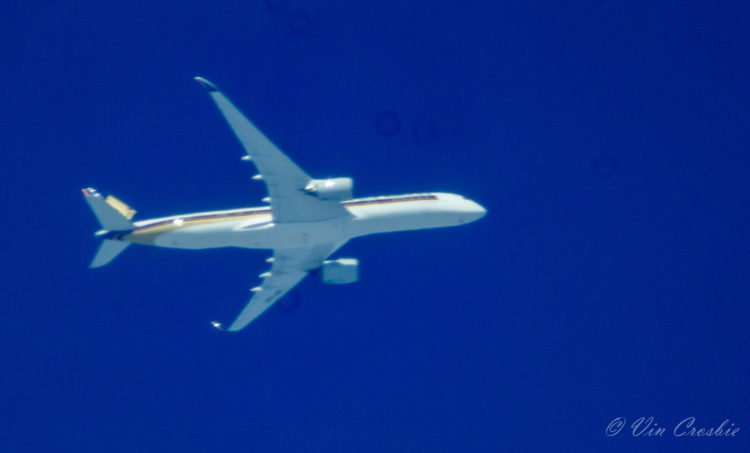 [If the color photo that heads this post doesn’t appear on you smartphone, click here to view it.] Each morning at approximately 10:15 a.m. New York time (15:15 UTC), I can gaze upwards from my home a watch a jet airliner pass three miles over me and heading northeast. While that’s not unusual because I live 30 miles (48 kilometers), 40 miles (63 km), and 50 miles (96 km) respectively from the New York City area’s LaGuardia, John F. Kennedy (JFK), and Newark Liberty airports, this daily airliner is special. It’s approximately six minutes into the world’s longest non-stop airliner flight. Even without binoculars, I can see the stylized gold dragon against a blue background on the tail of this mostly otherwise white aircraft: a new, twin-engine Airbus a350-900 ULR (Ultra Long Range) model. It’s Singapore Airlines’ legendary Flight SQ21 and will be aloft some 18-hour before it completes its 9,534 mile non-stop flight from Newark Liberty International Airport (EWR). Singapore Airlines flew this route, setting the all-time record for a scheduled jet airline flight, from 2004 to 2013, then relaunched SQ21 this past October. (By the way, Cable News Network covered the relaunch of the route as if no airliner had ever flown that far before. Didn’t anybody at CNN know that Singapore Airlines had flown it from 2004 to 2013?) The earlier version of SQ21 used a long-range version of the four-engine Airbus a340 aircraft and carried a mix of coach and business class passengers. However, the route perennially lost money because these a350s had to be fitted with fewer than normal seats in coach due to the extra weight of the fuel needed to fly that long. By 2010, Singapore Airways had converted the a350s on this route to carry only 100 business class seats.  Nonetheless, that wasn’t economical. The airline revived the route after Airbus Industries designed for it this special model of the new a350, which can carry both coach and business class while using less fuel than the a340s did.  The a340 versions of SQ21 usually headed due north from New York City, flying over the North Pole, then south across Siberia, China, and Southeast Asia to Singapore. Depending upon the jet stream in the northern hemisphere, the a350 new versions of this flight will use that same route or follow a much more divergent route: using the jet stream to give the aircraft […] 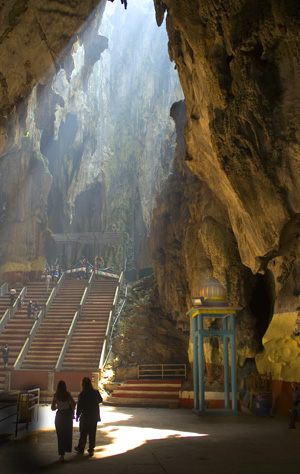 I returned Sunday from two weeks in Singapore and Malaysia. My round-trip was on the world’s longest commercial airline route: Singapore Airlines’ Non-stop flights between Newark and Singapore. Each 15,349-kilometer (9,593-mile) flight takes between 18 and 20 hours, depending upon weather conditions. The airline uses a four-engine Airbus 340-500 with 181 (rather than the standard 300) seats.