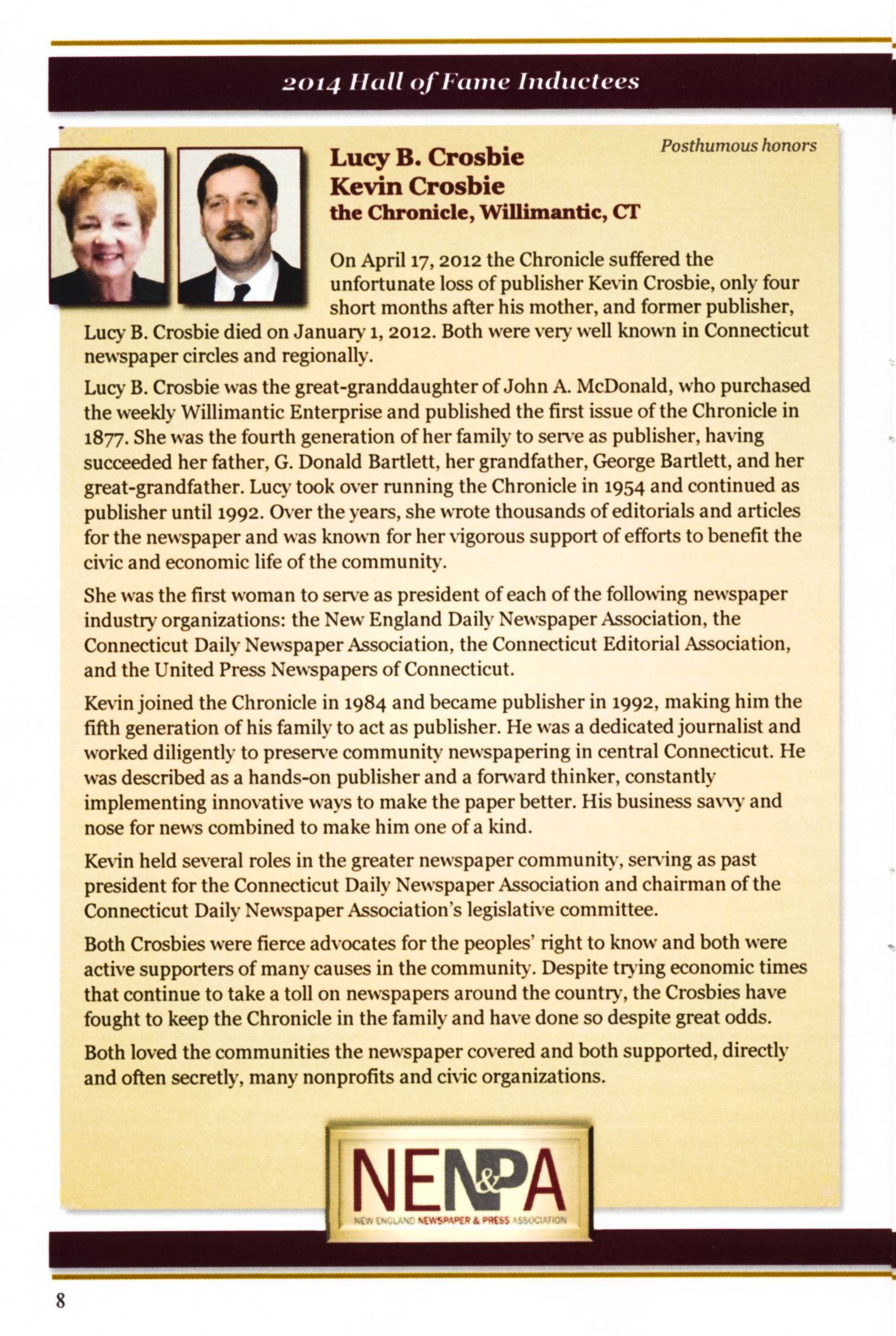 I am proud that the New England Newspaper & Press Association has inducted my late mother and my late brother into the New England Newspaper Hall of Fame. Please click this link to see photos of the induction dinner and event, which was held in the Park Plaza Hotel, in Boston, Massachusetts. Besides my surviving family, many people from the New England newspaper were there. Charles Ryan, editor of the daily Chronicle in Willimantic, Connecticut, gave the nomination speech. Patrice Crosbie, Kevin’s widow and his successor as Publisher of the Chronicle, accepted the award, which was given by Gary Ferrugia, publisher of The Day, of New London, Connecticut.

Delivered by Vincent Bartlett Crosbie Funeral of Lucy May Bartlett Crosbie Friday, January 6, 2012 St. Joseph’s Church 99 Jackson Street Willimantic, Connecticut, USA   Forgive me if my voice quavers or breaks. Outside as my role as her son, I’ve given perhaps 100 speeches, to up to a thousand people. But this will be the most difficult I’ve ever given: The eulogy for Lucy before her closest friends. All who knew Lucy knew that she was as integral to Eastern Connecticut as are the Willimantic, Shetucket, and Thames rivers. And like those rivers, her life was enriched by various streams: The headspring of these streams was the legacy she inherited at a young age: The daily newspaper her great-great-grandfather founded in 1877 and which the family has operated ever since. She never had to find a purpose in life. The Chronicle was the effervescent stream that gave her life purpose. That purpose was to ensure the flows, ebbs, eddies, and course of news and information about the area’s communities. To satisfy the thirsts of people who wanted to know what was going on in the town where they lived. She was the reporter’s reporter. If she couldn’t find a reporter to report the story, she would do it herself. (Indeed, it wasn’t unusual for police or firemen to see the Chronicle’s publisher among the first responders at a blaze or accident. On the day she died I finally disconnected the police/fire radio in her home.) Her standards of journalism were high. Those who worked for her know that she brooked no inaccuracies, never meandered from objectivity. She was a font of local knowledge. The high water marks of her work were probably the 100th and 125th-year commemorative editions of the Chronicle and 275th and 300th-year editions about the founding of the town of Windham, each of which offered a flood of historical information and stories about this community—most written by Lucy. (She even wrote a history book about Groton Long Point, the community where for decades she spent summers.) Her career, which lasted for 66 years, ran a remarkable course. She began working part-time at the Chronicle at age 16, one month after the death of her father, at the time the newspaper’s publisher. She then completed in just three years a B.A. in Management from Boston University, thereafter working for the Chronicle for the rest of her life. In […]