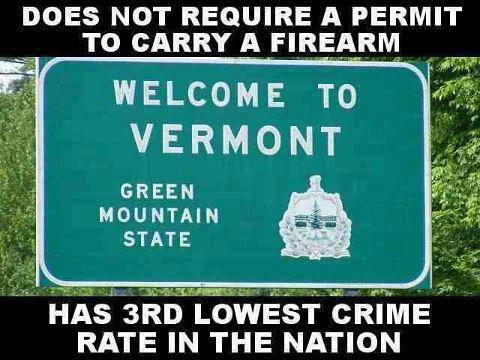 The graphic at left is an example. The graphic states that the state of Vermont, which does not require the licensing of its citizens’ firearms, has the third-lowest crime rate in the United States.

That statement is largely true: Vermont does not require the licensing of its citizen’s firearms. And Vermont has a low crime rate compared to the other 49 U.S. states (for example, it had the 15th lowest gun homicide rate during 2013).

The graphic attempts to convince people that not requiring permits or licenses to own firearms—in other words, looser laws about gun control—results in fewer crimes. It infers that looser gun laws anywhere equal less crimes of any kind.

The rural state of Vermont (largest city: 42,417 people; second largest city: 17,904 people) does indeed have a low crime rate. However, the whole data about crime in the U.S.—in other words, the data for all 50 U.S. states—shows the opposite correlation between gun laws and crime. That data shows that Vermont is a rare exception to what’s overall true.

The table below list each U.S. state, it’s rate of gun-related deaths, and how strict (blue) or loose (grey) its gun laws are. This overall data shows a direct correlation—more strict gun control laws equal less gun-related deaths and safer citizens. (For another example of such overall data, see Harvard University’s conclusions about multiple scientific studies by it and other universities that study public health and crime—neutral studies that weren’t funded by either the gun lobby or by anti-gun advocates.)

It’s easy for propagandists to cherry-pick an outlying data point—something that is actually an exception to the overall rule (such the low crime rate in Vermont, an exceptionally rural and sparsely populated state)—from which they will then attempt to infer a false conclusion. Such propaganda will probably fool people who don’t think to look at the overall data or who simply want the false overall conclusion to be true.

Such exceptions can be found in almost any set of data, even data in which most people would never expect there to be any exceptions. For example, everyone knows and understands that the sun rises in the east and sets in the west. However, there are actually two places on Earth where that is not true (see beneath the table below for the answers where). Yet does the existence of those two exceptional places mean that people can’t rely on the sun rising in the east and setting in the west? Of course not. Don’t be fooled by propagandists cherry-picking data.